We had our second show of the season this weekend!  We hauled in Thursday evening and I wasn’t able to be there while Mister was loaded or unloaded and he got to the grounds a bit unnerved, apparently calling until I showed up.  Poor guy!  He settled down as soon as I showed up and visited with him for a bit.  I saddled him and brought him into the arena, no lunging aside from the few minutes at home where we decided he was ok enough to go to the show-he has had funny movement the previous couple days and we weren’t sure if he was even going to come! We tried a few different saddles because we thought maybe it was the saddle causing it!  It seemed worse in our dressage saddle, better in my riding instructors old English and better in my western saddle!  It was a bit stressful!  Plus the last few weeks I had really been doubting this dressage stuff as it seemed Mister really didn’t want to do it.  He was losing weight, and just seemed unhappy!  So we cut back on the dressage lessons and gave him a bit of a break and he seemed to perk back up, plus started jogging and loping too instead of always pushing him faster.  We will keep his dressage lessons to half of what they were and add in his strengths for the other days.  He really does try his heart out for me!

This weekend he was amazing!! I lunged him only for a few minutes all weekend and that was just to see how he was moving, which was fine!  And that was with my dressage saddle so he seemed to be a bit better!  Thursday we rode with everyone in the arena and he seemed mostly ok, a bit edgy, tried to buck once but I rode through it and made him keep going.  He seemed to still be a bit silly but  ok.  Rode him with one of the other girls cause everyone else left and I was nervous about riding without anyone else there.  He really settled down after that!

On Friday he was perfect!!! Rode him in the warm up ring and he was a little sketchy but was easily calmed.  Then we rode our first test and he did great!  Walked in so nicely!  And was a bit shakey going down centre line but our stop was square! We did our test and he really cantered nicely and I didn’t feel like he was running away or that I was holding him back.  We had some mistakes and by the end of the test he had really lost his momentum but all in all he was great!  And hanging out while we waited for our second test he was just so sweet!  People coming up and telling me how nice of a horse he is and that he has a kind eye!  He really is beautiful and just has a beautiful soul!!! I love that horse!  Our second test I tanked, just wasn’t focused, I was hungry and had to go to the bathroom!  I had had enough time before that test I should have looked after myself too!  Got 54% and 51%on my Training level Test 3.  Not bad since my last test was the walk/jog test!

Saturday I rode him quickly, missed my first test because of a mix up in times-but rode my second test which was the same test as my Western one-Training level test 3! This time we got 59%!!!  In English!  And got a 4th place ribbon!  Plus he was just so well behaved!  Remarks from the judge were all about good effort need more impulsion and to keep him on the bit.  And of course more accuracy.  Definitely will keep working on them!

Will keep balancing between dressage and western pleasure!  Mister did very well and our next show will have a western championship component to it! A western pleasure class, a class to show which horses are best suited to western dressage and a western dressage class!  So we will be doing those classes plus classical dressage!  I am super excited about the next month of riding and the next show!  Anyways our show season keeps getting better! 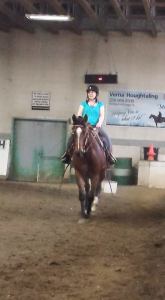 Another Thursday warm up!

After our Dressage test! All smiles!